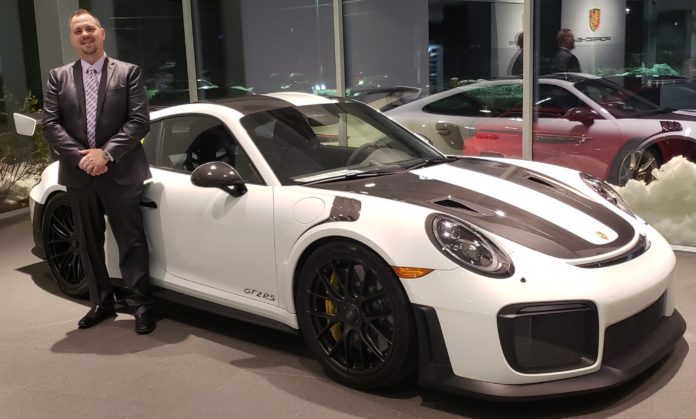 The auto industry is filled with fast-paced transitions, cutting edge designs, and a race to the latest luxury features. Jamie Benti has risen to the top of this mountain working with brands ranging from Porche to Volkswagen and Audi. A 20 year professional, Jamie has experienced practically every side of the car business. The lessons and principles he’s learned that have made him so successful in this often cut-throat business transcend the industry. They can (and should) be applied to any profession or endeavor.

How did you get your start in the auto industry?

“When I was in my mid 20’s I was working at a hotel. I had a customer one day offer me a job at his Acura dealership. I took the job, but it was kind of a joke to me. Just a fun thing to do. I had no aspirations of becoming a car guy. I was focused on a lot of other things in the beginning. I was also working in the entertainment industry and ran a lot of events, so I wasn’t really committed to the auto industry. I was surprised when I started actually making good money. I would sell 15-20 cars and everyone was amazed that I was able to do that. When I realized how lucrative it could be I started taking it more seriously as a career. What I found was if you just showed up, smiled and were polite and positive people would gravitate towards you. I didn’t love cars or really know much about them. People would ask me questions like, “Can you tell me what the curb weight is?” I would joke and say something like, “I don’t know, are you gonna carry it or drive it?”

…if you just showed up, smiled and were polite positive people would gravitate towards you.

I’d get a big laugh and move on. The other sales guys wondered how I got away with saying stuff like that. I was just good with people. People were expecting the stereotypical, flannel jacket, fast Eddy car salesman but I’ve always tried to just be transparent and genuine. Most people can sniff out a phony.”

You mentioned also working in entertainment, can you tell us more about that?

When I was younger I did a lot of theater. I always enjoyed being in the spotlight. At my high school we had a news program were we’d do little skits and commercials. I was really proud of it and enjoyed feeling like a celebrity. Getting recognition. I got in a movie one time in Boston called “The Newcomers” where I got to meet Chris Evans when he was just starting out. I don’t think I was I was ready for that world though. It’s easy to get caught up in the wrong things and I’m not sure I would’ve been able to handle that level of success in that stage of my life. I kept a passion for it though. I started working with some fashion shows and stage productions and then started a  film festival called “Ruff Cutz” where we had indie filmmakers showcase their work. I really enjoyed providing a space for people to make the connections that got them to the next level. I think it really helped me learn how to interact better with people which set me up to do so well in the car business. I learned to recognize and showcase talent and it may sound weird, but I think of automobiles the same way.

I know for a period of time you were the buyer for a pre-owned division of a dealership. There’s limited “real estate” on the lot, how did you know what inventory should fill those spots?

Just like in real estate, you have to learn the market. Getting in tune to what people want to buy, what will move quickly and what won’t. I made a lot of mistakes in the beginning. I didn’t really have any training. They just said, “Hey, go buy some cars for the lot.”

I pretended to know what I was doing and was probably more confident than I should have been. I skipped steps, didn’t do things I should have, and did do things I shouldn’t have. I was stubborn and didn’t want to admit that I didn’t know what I was doing. Those were costly, painful lessons. It takes time and experience…and failure. I had to adopt the mindset that I was spending MY money. So if my owner said, “I’m giving you $5 Million to buy cars.” I had to learn that that’s not just an open checkbook to gamble with.

You’ve worked with a number of notable brands from Volkswagen to Audi to  Porsche. What’s been the most interesting differences you’ve noticed between working with different brands.

I’ve gotten to interact with a lot of different people from all walks of life. Very affluent people, athletes, celebrities, and the regular joe. One time I had a young international student come in. He was maybe in his early twenties. He’d just purchased a Ferrari 488 for $310,000. He had come in to look at a Porsche GT2 RS for $340,000 ($20k-$30k over sticker). It blew my mind that a guy his age was able to afford a car like that. Not to mention the $60k loss on the Ferrari, he laughed about like it was nothing.

Then I’ve had people just looking for a daily driver or family car like a VW Atlas. They’re counting every penny, stressing over $10-$20 in a payment.
A lot of celebrities send their kids to school over in Providence, RI. Some of my clientele were people like Al Roker, Kevin Bacon, and Danny DeVito. DeVito came in to buy his daughter a car. He didn’t want to be treated as a celebrity, he just wanted to be a dad. A lot of the referrals I got from those type of folks was because I just treated them like normal people.

You went from a Porsche/Audi store to now running a Jeep franchise. Why did you make that transition?

They had decided to split up the Porsche and Audi brands into different stores and wanted me to run the Porsche dealership in Burlington, MA. Another opportunity that I didn’t expect came up with the Jeep franchise. They were a Christian family which meant something to me personally. I’m not the best example, but God has definitely had a big impact on my life over the past 4 years.

They were building a brand new dealership and asked me if I would build it with them and oversee it. It was an opportunity I couldn’t pass up. I like a challenge.

You’ve obviously been very successful in your career, how do you stand out from your competition?

Maintaining high standards for process and presentation. When a car comes in we do what we call “making it front line ready”. It’s like getting fruit at a grocery store. The fruit doesn’t last forever, it eventually spoils. A strong online presence is essential so making sure you have great pictures & video, carfax report, and details of all the features helps get you noticed when people inevitably shop online. Data shows that the average customer spends 16 hours researching online before even coming in. While presentation is very important, like a restaurant, if the restaurant looks great but the food is awful, people aren’t going back. So you’ve got to also build a reputation of being trustworthy and having great service.

Who has been a mentor or person of great influence through your life and career?

My Grand-Father was like my dad. He taught me consistency. He was one of the few people growing up that always believed in me and encouraged me and was positive. Some of the lessons he taught me I didn’t even fully understand until after he passed away. He would say, “Jamie, no one remembers the good things that I do, but they can’t seem to forget the bad.” I never knew what that meant. Then as an adult, I realized that you may do a lot of good things at home with your family. You work really hard and no one seems to notice, but then you can do one little thing wrong and people are all over it.

We’ve noticed that a lot of people, even those like you who operate at a high level of what they do, also have a side hustle ….. or 3. Is this true for you, or are all of your eggs in the car business basket?

I’ve always kept an interest in other things.  I’ve got some rental properties, a 16 space garage, a microgreen business and a novelty chocolate company in the works (I can’t say too much about this yet). I’m just trying to build a portfolio of different stuff to create residual income. I’ve even started a Youtube channel with my daughters for fun. I’m not sure where it’s going to go, but It’s a great way to document them growing up.

What’s a  lesson you’ve learned in your career that you feel would help someone just starting out?

Consistency. There are a lot of things I did early in my life that If I had just stuck with it I would probably be much further along today. It’s so easy to get distracted, so if there’s something you’re passionate about stick with it. I started a youtube channel 12 years ago with some buddies. Another friend of ours started a channel too about the same time. We stopped, he kept going. Now he doesn’t work a regular job anymore. So whatever it is for you, follow through. It’s not meant to be easy.